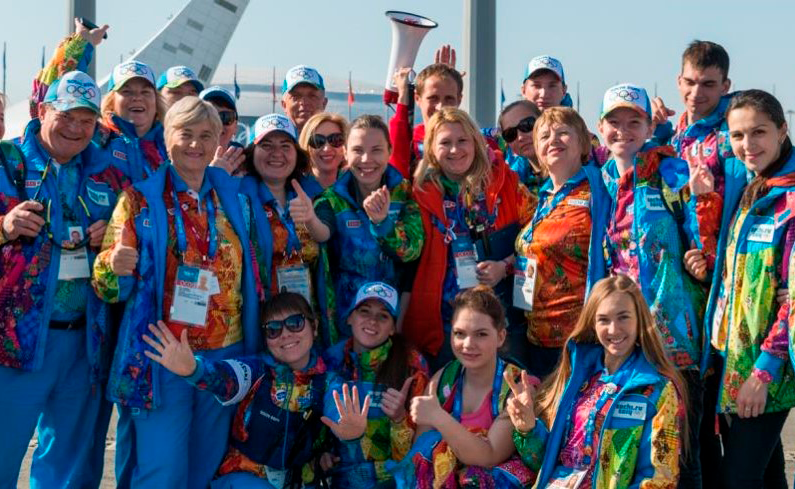 Sochi 2014 project turned out to be immense for our company as well as for whole country. We started our cooperation in 2011 and held assessment of all the employees across all 53 functional departments of Sochi 2014 Organizing committe. Our experts formulated the values which later became the basis for development of competencies for different levels of employees.

Assessment of functional teams effectivees bacame an extremely important project stage, during which the departments operating activities and interactions were analyzed and optimized.

All top-managers undertook Detech assessment centers and received the feedback on further development. Our coaches supported the members all along the project.

We have also performed such unprecedented projects as: Olympic and Paralympic volunteers assessment and future venue managers selections. The volunteer project became unique in terms of numbers – we had assessed over 100 thousand people within just a year to select 25 thousands being able to join the volunteer force. Venue manager selection was unique in terms of contents – there simply were no such specialists in our country ever before. Basing on the previous Games experience a list of crutial competencies was formed and used to select the candidates with the highest potential. Literally 35 persons were selected across the whole country, their abilities, personal features and values proved that they were able to fullfill this task. The volume of work they faced was truly immense^ starting with venue project and bulding stright to competition finals.

Undoubtedly the positive results of Detech tools usage were clear even during the test events – World and European Cups on just built venues. After these test events we have performed a huge project – Operationsl Readiness evaluation. All the critical incidents were accumulated and analyzed within this project. It helped to optimize the processes and minimize risks during the Games.

Our experts were granted a wonderful chance to bacome torch bearers during the Olympic torch relay in Vladikavkaz and Sochi! On the Olympic partners meeting devoted to successful Games results Svetlana Simonenko, the managing partner of Detech, had presented the fulfilled projects.

Selection of venue managers for the Olympics

The managers of sports facilities— venue managers — are key figures in the Olympic team. The objective of a venue manager is the operational management of sports facilities at all stages of the preparation of the Games: starting from the construction of the actual venues through the preparation and staging of test events, right until the very end of the Games.

The scope of the work and level of responsibility assumed by a venue manager is in actual fact colossal: coordinating the actions of all departments in the case of emergencies, providing comfortable accommodation for the guests of the Games and sportsmen and ensuring the effective performance of maintenance staff, security, the emergency services, and granting access to the press.

At the time of the creation of the vacancy of venue manager, it became clear that no such tailor-made specialists with such a profile could be found in Russia, while at the same time such individuals could not be attracted from other countries. Consequently Detech and the Sochi Games Organizing Committee jointly drafted the list of competencies (criteria for effective behavior) that venue managers should possess. This list is based on the experience of previous Olympic Games, in particular the 2010 Vancouver Games, and takes account of Russian and regional specifics. Proceeding from the list of the required competencies, we selected individuals, who had no experience of working as venue managers, but at the same time possessed the necessary background data and potential to cope with the task.

The actual project of the venue manager is a kind of start up – to build an entire system from scratch and ensure its subsequent effective functioning. This means that initially the venue manager works all alone, liaising with numerous contractors and supervising their work, and maintains a vast amount of documentation on the project. Gradually the venue manager builds a constantly expanding team, in other words the venue manager makes the transition from individual work to teamwork and people management. This is one of the main difficulties – to find people, who will be equally effective in all these incarnations at all stages of the project and at the same time will be motivated to remain at the company; this is extremely rare.

As we mentioned earlier, the competencies required of a venue manager proceed directly from the individual’s objectives and responsibilities. The scope of work at the Games implies clear-cut and stringent planning and good organizational abilities. Analytical abilities are very important, as it is necessary to assess the situation clearly and rapidly and adopt corresponding decisions. Working with a large number of people (moreover, several hundred contractors may be involved at a facility), frequently with individuals, who do not report directly to the venue manager, require the latter to possess the skills required to build relations that facilitate the attainment of the necessary result, and to work in a team. The actual specifics of the position imply that the individual is ready to assume responsibility, take personal control for everything, and also be loyal to the employer. All these factors mean that the venue manager should be able to handle stress, which became one of the leading competencies. For example, such an individual should have strong leadership qualities owing to the need to constantly control and adjust developments at the facility, manage people and promptly resolve any problems that may arise.

The path from the search for candidates to the actual offer of employment included six stages. After a short telephone interview and a more detailed one-on-one interview of the candidate with a consultant from Kelly Services, each participant, who had successfully passed these stages, was asked to take on-line ability and personality tests developed by Detech. The tests provided a general understanding of the potential and possible risks of each candidate and facilitated the selection of the most promising individuals.

Based on the results of the Assessment Center a detailed report was compiled for each candidate, including a description of the individual’s strengths, risks, possible development areas and level of compliance with the position of venue manager. Subsequently candidates who met all the requirements were hired.

Queen Máxima of the Netherlands shared her impressions about the volunteers: “They are amazing – they are eager to help and practically run after you with broad sincere smiles on their faces.” International Olympic Committee President Thomas Bach more than once expressed his admiration for Russian hospitality. Аргументы и Факты

Winter Olympic volunteers bring colour and cheer to Sochi from across Russia. The Guardian

Volunteers are individuals who are ready to help to implement projects for free. Furthermore, the projects may be in completely different areas: from helping the homeless to assisting with the organization of the Olympic Games. Volunteering at the Olympic and Paralympic Games represents a unique opportunity to be at the very heart of events and have a chance to observe what a spectator will never see. While it is widespread and popular abroad, volunteering in Russia today is not that developed. However, if we look at history, it becomes clear that this idea is by no means new, and that even in Soviet days there were a number of “projects” where a major role was placed by non-professionals who worked for the sake of an idea: just think of the construction of the Baikal-Amur Railroad, construction brigades and even subbotniki [unpaid weekend work]. More often than not people would participate in the process for the opportunity to interact, to gain new impressions, and to “be in the mix”. At the same time, however, one should not forget that this was still first and foremost work, and not easy work at that.

As the selection of people as volunteers of the Olympic and Paralympic Games does not simply involve the hiring of staff, but rather implementation of the grand national idea aimed at bringing people together from all over the country, the approach should be entirely special and innovative. The key issue was to provide an opportunity for everyone, in other words, not only objectively assessing each respondent, but also facilitating the participation of people from every single region, and making the selection process as democratic as possible. For the first time in the history of the Games, volunteers were selected according to a methodology that had been developed specifically with this goal in mind and involved the use of on-line testing. This methodology was drafted by Detech as part of its partnership with the Sochi 2014 Organizing Committee.

We developed on-line questionnaires that made it possible to identify an individual’s specific personality traits, and also ability tests that made it possible to determine how well the future volunteer would be able to assimilate the training material. These tests took the form of short assignments, to be solved within tight time constraints. It was only after the applicants had successfully passed the test that they were invited to one of 26 volunteer centers all over Russia for face-to-face interviews. After this, the more refined selection was performed in line with specific functions at the Games. This structure made it possible to minimize not only the organizers’ costs, but also the travel costs of those who wanted to participate in the Sochi 2014 volunteer program.

If you are to be successful in your chosen profession, you need to possess specific competencies, character traits, personal qualities and behavioral attributes at the workplace. This is also true of volunteering. In order to identify whether the applicants possessed these qualities, we devised a special methodology based on psychometric testing. The experience of the previous Games served as the basis. The consultants analyzed all the work that had been performed at the Games by the volunteers, possible functions, and mistakes that might occur. Subsequently, we identified general qualities that each volunteer should have.

The first quality that should be mentioned: applicants have to have an interest in the Olympic and Paralympic Games, and have a clear picture of what is involved in volunteering; they should be ready to work for free and take on a heavy workload, understanding the goal of their participation and their contribution.

A second key quality is the ability and willingness to communicate, help the guests of the Games at various levels on any issues. Volunteers are the individuals who create an atmosphere of hospitality and goodwill at the Games. Consequently, the volunteers should be open, have accurate information, and know how to present it to guests in a clear and friendly manner.

The organizers of the Olympic Games – and the volunteers represent one of the organizers – work in a stressful environment, which means that they must be able to stay calm in any situation. Consequently, stress resistance is the third key quality. For example, the volunteer should know how to work calmly when dealing simultaneously with a large number of people, all of whom has their own questions, while remaining at the same time hardworking and kind.

Participation in the volunteer movement is also a very responsible undertaking, which requires an ability to prioritize correctly, to be responsible and to uphold established standards and norms. Consequently, compliance is the fourth necessary criteria – at the same time the individual should remain amicable and avoid creating conflicts. A total of 25,000 volunteers were selected for the 2014 Winter Olympic and Paralympic Games – you cannot survive in this environment without team spirit and the ability to put common interests before your own.

When we read feedback about the work of volunteers in the Russian and foreign media, we are delighted to recognize that we are to a large extent responsible!

How we can help you